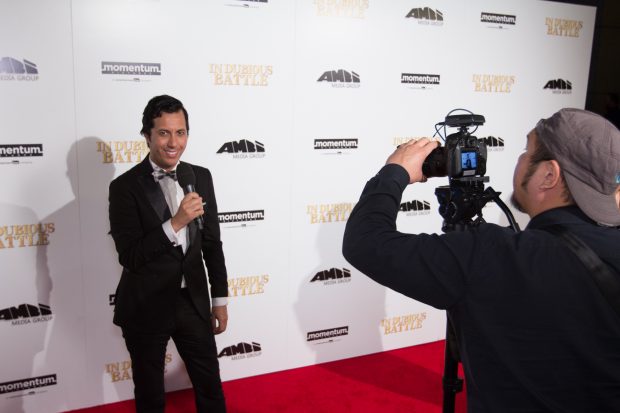 Simobb, a Moroccan TV showbiz reporter who is passionate about intriguing the Arab gossip media both in Morocco and the Arab world with fascinating reports covered the sneak preview of “In Dubious Battle” premier at the Arclight Hollywood for Al Arabiya News on Feb. 19, 2017. During the film’s premiere at the Arclight Hollywood on Wednesday evening, star and director Franco was joined by co-stars Nat Wolff, Ashley Greene, and Ahna O’Reilly, as well as fellow producers Andrea Iervolino and Monika Bacardi to discuss the modern application of John Steinbeck’s first novel within what became known as the Dustbowl trilogy to speak about contemporary America.

“In Dubious Battle,” which had its world premiere at the Venice Film Festival on Sept. 3, 2016 is based on John Steinbeck’s novel of the same name, with a screenplay by Matthew Rager. The film features an ensemble cast, consisting of Franco, Nat Wolff, Josh Hutcherson, Selena Gomez, Vincent D’Onofrio, Analeigh Tipton, Zach Braff, Bryan Cranston, Ed Harris, and Robert Duvall. The film gets caught up in the labor movement for fruit workers in California during the 1930s.

The story, set in 1933, focuses on young Jim Nolan (Wolff), the latest recruit of a small political party who’s taken under his wing by the smooth-talking and more experienced Mac McLeod (Franco). Their approach to fighting for workers’ rights is to infiltrate a group of apple pickers in California who have been told by the local landowner, Bolton (Duvall), that their pay won’t be $3 a day but actually just $1 a day because “times are tough.”

“I read John Steinbeck’s first novel and I realized it’s such an amazing story,” Franco explained. It was also very topical and eternal in its themes — about a labor strike, about the haves and have nots. I thought it was an important story to tell.”

“The film’s endorsement of team work over individual battle as fuel for change is an important concept that applies to many present-day social efforts. I think it is resoundingly clear that we are going through the same thing right now and we are fighting for equality. I think it will be something, especially right now, that people will easily relate to…. It will touch a lot of people’s hearts because we all right now, I think, feel that fire,” co-star Greene added.

Al Arabiya News Channel, which is the leading 24-hour news station in the Arab world is renowned for featuring a groundbreaking new design and unique “View More” video service that offers fully searchable, educative clips from around the world. Meanhwile, Simobb who covers glamorous international events for Al Arabiya News currently is always keen on using his vast experience in the media industry to reach an international audience to deepen understanding of Arab societies, cultures and economies.

Share
Previous All You Need to Know About the Multi-talented – Harwan Red
Next Hind Nourssine is set to rock UAE, North America Europe, and the United States with the Launch of Her Fantastic Line of Aloe Vera Products (Noursin) in May 2017