All You Need to Know About the Multi-talented – Harwan Red

editor April 18, 2017 sponsors Comments Off on All You Need to Know About the Multi-talented – Harwan Red 3,284 Views 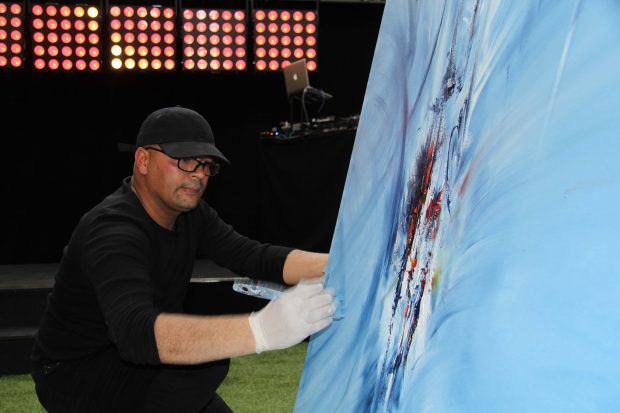 Besides being a charming, eloquent, quick-witted author and director, who is versatile with all kind of artistic paintings, he has a philosophical approach and creative techniques gotten from different art schools. Harwan knows how to make his way through the multitude of creators who strike at the gates of the art world trying to expose their works. Having won several awards, such as the award of merits in Brussels, the Michelangelo prize in Bruges, the Europa ARTE prize in Paris, he remains in the top ten position ranking of Artists and personalities who illuminate Belgium.

Thanks to his positive actions (ranking by the prestigious Brukmer magazine), original and innovative style, which is the culmination of a long artistic and human journey. His works were recently exhibited at the Museum of Bruges, alongside renowned artists such as Picasso and Miró, as well as those of several significant contemporary artists.

By his message and the brilliance of his canvases that leave no one indifferent to the four corners of our planet, Harwan, through his inimitable style, crosses borders without visas, to deliver this universal message of peace, love, and unity, which is the essence of his philosophy.

His paintings remain the continuation of his thought. He is passionate about sharing with the different peoples and civilizations that he meets regularly. His inspiration comes from everything around us, the society in which we operate, the world in which we live, and nature. His perpetual attempt to conquer space and time is summed up in the infinite extension of the colors that Harwan displays on the canvas and only the physical limits of the frames can suspend the flight.

His main objective is for his work to captivate the viewer’s gaze and plunges them into an indefinite whirlwind where the real and the unreal intermingle to confuse better. Harwan’s eternal quest for excellence and perfection inevitably pushes him to extend his vision to other disciplines and greater physical and virtual space. Of course, the Harwan’s course was not always a long quiet river.

Aside painting and his personal and professional experience, Harwan undertook research in the field of art therapy. The result of his work is delivered in the form of a triptych… the first part of which is the production of a short film on the subject, followed by a series of lectures and closed with a book with the evocative title: “Art Therapy, The opportunity for a second life.”

Harwan hopes that the tools and advice he offers will help his fellow men to navigate the pitfalls of the often-challenging paths and guide them to better progress in the path of their well-being.

“Art has been and remains my everyday therapist,” Harwan always say.

Of course, this is the personal experience of Harwan, and he was fortunate to discover his artistic talent early enough. This is the reason he advises anyone who is experiencing difficult times or who wants to protect himself/ herself from some of the evils undermining our era, to combine the beneficial contribution of an artistic discipline with the therapeutic approach. Apparently, they boost self-esteem and positively promotes the well-being and rapid development of an individual.

Harwan is an artist seeking excellence in all the fields in which he practices. The result of his avant-garde work and explorer of new trends stands out from all that abstract art has presented until today.