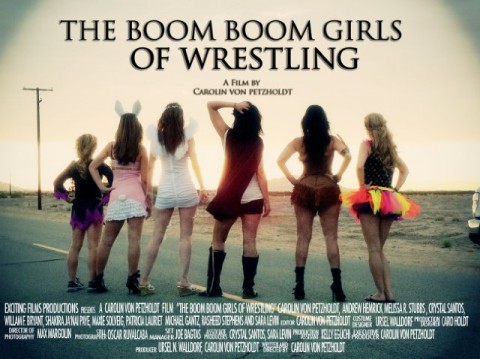 Unbelievable?! Two German female filmmakers came to Hollywood to make a movie for 5K. THE BOOM BOOM GIRLS OF WRESTLING is an indie film triumph!

Pasadena, California, USA, 07/10/2015 – Using creative budgeting, various cost-cutting techniques, volunteers, and a lot of blood, sweat, and tears, German filmmakers Carolin Von Petzholdt and Ursel Walldorf were able to bring their film vision to life. It is now being distributed on selective release across the nation. Independent filmmaking on small budgets is not unusual – the Sundance Film Festival routinely shows movies made for well under US$100,000 – but what makes THE BOOM BOOM GIRLS remarkable is that it was done for only $5k. This remarkable achievement even undercut the micro-budget indie thriller El Mariachi by Robert Rodriguez (who, along with Tarantino, was one of the inspirations for Von Petzholdt and Walldorf’s movie), made for $7k back in the 1990s.

THE BOOM BOOM GIRLS is an Exciting Films Production. Not only does it represent what can be accomplished with initiative and innovation, it’s also a unique spectacle of ‘sports horror’ sure to appeal to audiences looking for more than just a franchise reboot. For the first time since the heyday of Santo and the Blue Demon across the Mexican border, a movie is pitching wrestlers against the forces of evil – only this time they’re a bunch of tough chicks!

THE BOOM BOOM GIRLS OF WRESTLING tells the tale of six women who are determined to become professional female wrestlers and perform in a huge show in Las Vegas. Through heartbreak and hardship the girls hone their skills, but, as they are on their way to the culmination of their dreams in Vegas, they find themselves trapped in a ghost town in the middle of nowhere with a killer.

The movie is uniquely quirky, exhibiting the frenetic, guerrilla-style filmmaking of exploitation cinema from Russ Meyer to Quentin Tarantino – whose movies Faster Pussycat, Kill! Kill! and Kill Bill, with their feisty, fatal female leads, set a wild template for THE BOOM BOOM GIRLS. This is a school of filmmaking lost to the high-gloss, formulaic Hollywood style of production.  For two European filmmakers to have come to the US and made a movie for $5k in classic American exploitation style is a phenomenal achievement. Now they need your help (via Kickstarter) to ensure it receives the national distribution it deserves:

“We have already, successfully, completed this film.

“Now we need to get it out for Distribution and we need is YOUR Contribution.”

***STOP PRESS*** In a bizarre coda, THE BOOM BOOM GIRLS will be promoted by promotional events in New York City emceed by Michael Alig – the ‘Party Monster’, as portrayed by Macaulay Culkin in the movie of the same name. Recently released from a prison sentence for murdering his drug dealer friend, the infamous ex-party kid will use his notoriety in the furtherance of cinematic art…

THE BOOM BOOM GIRLS OF WRESTLING is now available for distribution.

You can find the Kickstarter at: https://www.kickstarter.com/projects/1473166771/the-boom-boom-girls-of-wrestling-post-production

Previous Brandon Adamson In This Town
Next CHARITY – A musician seeks to make the world a better place, a dream that eluded the rock scene of 1960s California…