The Dancing Doge: The L.A.-Based Pooch on a Mission to Become a Household Brand

editor December 2, 2015 sponsors Comments Off on The Dancing Doge: The L.A.-Based Pooch on a Mission to Become a Household Brand 1,775 Views 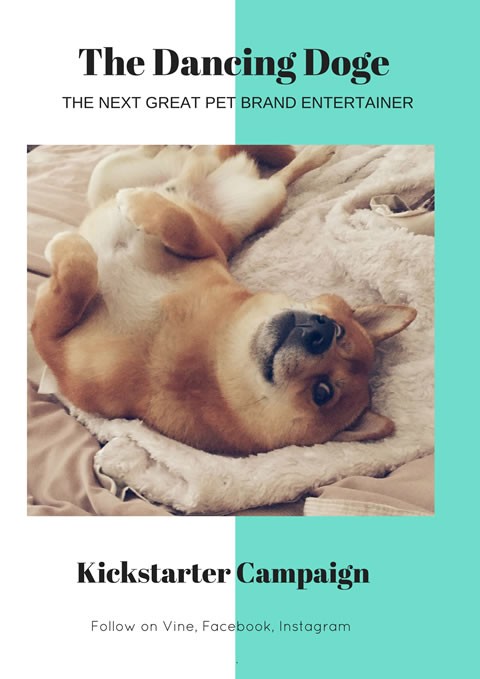 You’ve probably seen The Dancing Doge, the viral internet sensation featuring an adorable Shiba Inu from L.A. who just loves to dance. His strut to the Bee Gees’ “Staying Alive” and Drake’s “Hotline Bling” has hundreds of millions of views.  The videos have taken the online world by storm, being described by The Huffington Post as their ‘favorite thing on the internet’.  His owner Cal Boyington, one of the originators of Comedy Central’s Workaholics, has big plans for him, and is launching a bid to transform him into a household brand.  After the success of similar ventures by the likes of Lil Bub and Grumpy Cat, it’s high time a dog followed suit.  He is currently seeking funding via the crowdfunding platform Kickstarter to help him to achieve his mission.

The Dancing Doge’s newest venture is set to feature a hilarious music video, faux game show, and reality-show dance-off parody to establish a merchandise and publishing line around.  Dancing Doge will participate in charity work, media appearances and open himself up for commercials and TV and film cameo appearances.

Those who pledge support to this project can expect rewards including access to limited swag, shout-outs, behind-the-scenes footage of The Dancing Doge’s show, and the chance to spend an afternoon with the Doge himself. The Dancing Doge is already an online icon. It’s looks as if he’s set to achieve similar status in the offline world as well. You can view his Kickstarter page at https://www.kickstarter.com/projects/829680665/the-dancing-doge