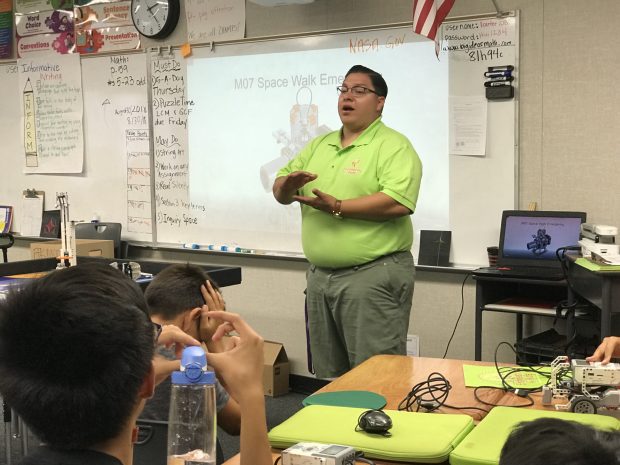 Joining the military right after high school, Kreimann obtained technical training in computer networking and satellite communications. He served as a Sergeant who specialized in joint node network management by providing communications and radio support to the troops of the 101st Airborne Division stationed in Sadr City, Iraq.

The inspiration to foray into the world of teaching came from Kreimann’s teen son, who recognized his father’s skills and expertise and thought it could benefit his peers.   He says, “My son suggested that I open a summer science camp or a computer engineering camp as there were none in the area. Although I was hesitant at first, I decided to give it a shot.”

Kreimann’s company has since expanded to training over 2000 students across 35 schools every year, a remarkable achievement for what had started off as a small science summer camp just a few years back.

Teams coached by Kreimann have competed in and won competitions in the Inland Empire. They also won a few state championship tournaments at Legoland in San Diego.

A high point for Kreimann’s business was his team winning the World Robotic Olympiad championship and representing the USA at the championship in Denmark where they competed against over 200 teams from over 70 countries.

Kreimann enthusiastically states that, “the idea behind our platform is to provide different competition opportunities for students to compete in science, technology, engineering, and math”.

A former football coach, he says, “I think helping kids compete in robotics tournaments encourages them to develop critical thinking and problem-solving skills and it gives me the same adrenaline rush I got coaching football.”

Hermann Kreimann’s company is committed to providing affordable programs as well as discounts to lower income families, because he understands that accessibility can be an issue.

Hermann wants to help his community and give back to students in need.

It’s important to note that interest might not be sufficient to make training in robotics accessible to many students as costs run upwards of $1,000 for basic training.
Kreimann says, “That’s not including international competitions and events.”

Kreimann also recently set up a non-profit to help those in need of financial support when it comes to learning.

They routinely run free programs and recently gave out six scholarships to students for their SumoBots League program, a robot wrestling league developed by Kreimann’s company.
During the pandemic when schools shut down, Kreimann also provided free virtual classes from April 2020 to June for over 150 students across the inland empire.

“One of my priorities is to never turn away a student who wants to learn.”

Share
Previous Crypto wallets: What you need to know
Next Ernesto Weisburg Reflects on His Career as a Private Investigator