Kitaro’s Magnificent “Kojiki and the Universe” Tour Comes to The Historic Immanuel Presbyterian Church in LA on Friday, Nov. 17.

editor November 3, 2017 sponsors Comments Off on Kitaro’s Magnificent “Kojiki and the Universe” Tour Comes to The Historic Immanuel Presbyterian Church in LA on Friday, Nov. 17. 1,663 Views 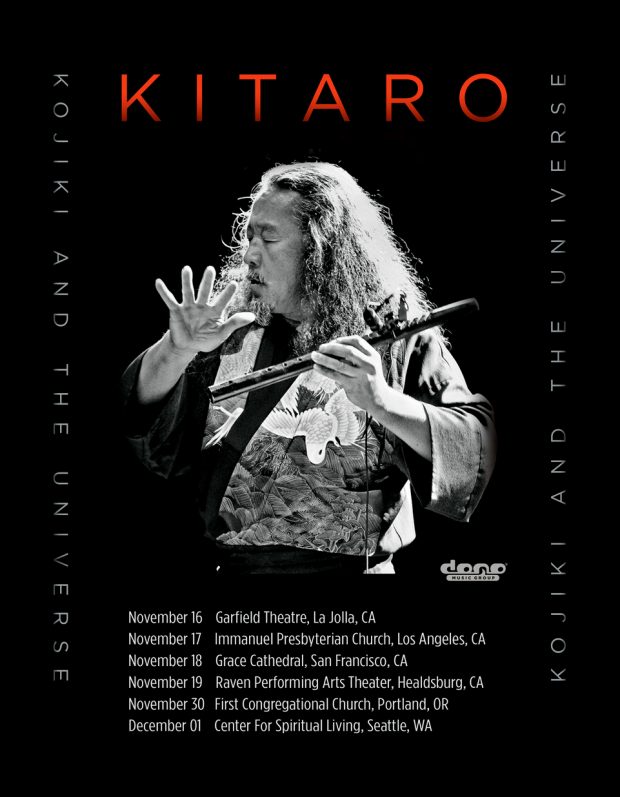 Kitaro’s Magnificent “Kojiki and the Universe” Tour Comes to The Historic Immanuel Presbyterian Church in LA on Friday, Nov. 17. Show Combines The Live Music Of Kitaro With A Visually Moving Astronomical Experience

Kitaro brings a totally unique audio/visual experience to California with his upcoming “Kojiki and The Universe” tour beginning November 16 and culminating December 1, 2017. The tour stop in Los Angeles is Friday, November 17 at the Historic Immanuel Presbyterian Church, following the opening night performance in San Diego the evening before at The Garfield Theater in San Diego on Thursday, November 16.

Presenting a totally unique visual experience, the presentation of “Kojiki and The Universe” merges Kitaro’s music for the show (his most notable songs as well as songs from “Kojiki”, his 1990 Grammy Nominated album) with dynamic space-age photographic scenes of the Universe. The awesome visuals feature time-lapse images, expertly intertwined with real-time films provided by, and in cooperation with, NASA and Kyoto University. Watch the tour trailer here: http://bit.ly/UniverseTour

“Kojiki and The Universe” was created by Kitaro in collaboration with Astronomy Professor Kazunari Shibata. The entire production of Kojiki and the Universe was developed using modern film editing techniques, as well as state-of-the-art hardware and software. In Japanese myth: logy, Kojiki is a story closely related to evolution of the universe. It describes the origin of Heaven, Earth and the creation of the Gods. Utilizing Kitaro’s album as the soundtrack, “Kojiki and The Universe” is a chronicle of astronomical research as well as a beautiful introduction to modern astronomy for everyone. Here’s an example of one of the scenes (http://bit.ly/2z3bw3x) from the show.

The Sacred Journey of Ku-Kai series is an earthly voyage that transports the listener to the eighty-eight sacred temples located on Shikoku Island in Japan, ancestral home of the beloved Buddhist holy man Ku-kai. The music, which pays homage to the true to life excursion made over 1100 years ago on Shikoku Island endures to this day. Each track on the album revolves around the unique bell sound from the individual temples, using actual sampling and Kitaro’s inspired musical interpretations and distillations of their essences.

Previous Advanced dental care practice in the heart of Miracle Mile helps patients in the Los Angeles area live longer
Next Laura Auclair – The Young, Ambitious, and Believer In Following Your Dreams