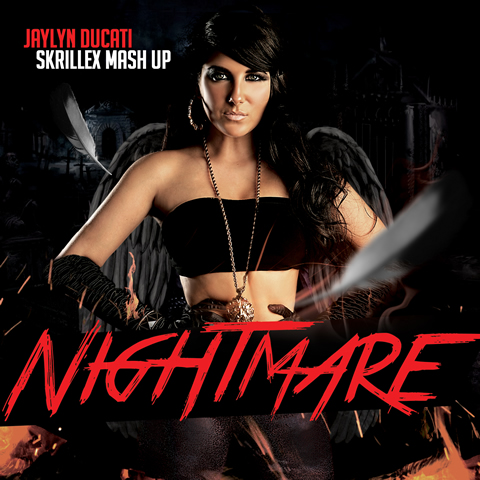 Los Angeles (Octoberr  5th, 2013) — Mash Up singles are complicated,  “Mashup” (elements of two or more pre-existing pieces of music and combine them to make a new song. Mashups are not usually recognized by the industry as “real songs” However Jaylyn’s singles have always been accepted by the dance crowd instantly, as will be the same with her latest release ‘Nightmare’. Paired with a sexy and scary video, this entertaining song tells a story. Singing this generation’s music, this infectious song has foot tapping music and has mind blowing lyrics to listen to.

Singer and song writer, Jaylyn had always wanted to be involved with music. With an attractive voice; she moved the Indi dance  culture scene and created ripples with her music. Her previous release was a remix called the “Disco Dangers” online which gathered great many comments appreciating her dance, voice and the music. Full of energy and an amazing voice, Jaylyn has already created a strong fan base in LA. This heart thumping single is sure to become a rave song to be played at all parties. The song is about a girl having dreams and nightmares and how she is deals with it by fighting instead of getting scared. The music is guaranteed to enthrall you and get you dancing.

“It was perfect; I could not sit still listening to her music. The Nightmare was beautiful and so was she. I am looking forward to listening more from her!!” Natasha Kimberly, http://abclocal.go.com Los Angeles

“I just came across the music video and just ended up listening to it like five times in a row. Jaylyn looks amazing! I have already downloaded it. Keep it up Jaylyn.”Helen Burge losangeleschronicle.blogspot.com California

Jaylyn is all set to blaze the music scene with her mash up single ‘Nightmare’. With a fantastic vocal and instrumental track this song is soon going to become a smash hit. Her You Tube Video is already gathering appreciative comments. Not just a pop star, Jaylyn also believes in philanthropy. Her previous single call ‘Dust Again’ was influenced by hurricane Sandy and 100% of the downloads were donated to the Red Cross to help the victims.