editor June 23, 2015 sponsors Comments Off on A Short Film and Accompanying Book Rediscover the Ancient Greek Concept of Peripatetics 1,431 Views 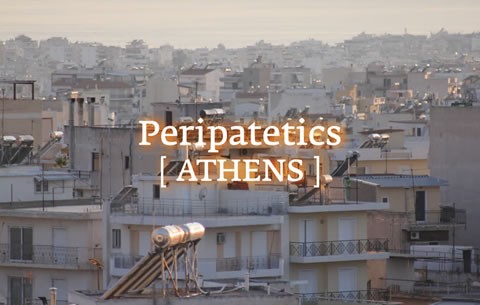 Athens, Greece, 22 June 2015 – The term ‘peripatetics’ is derived from an adjective used to describe the followers of the Peripatetic school of philosophy in Ancient Greece, which was founded by Aristotle. It means travelling from place to place, and refers to Aristotle’s practice of walking whilst teaching. A team of artists is attempting to illustrate examples of it in modern-day Athens by producing a short film and accompanying book, containing writing and photos. It seeks to demonstrate how an individual wandering from one part of the city another can impart lessons to others.  They are currently attempting to gain funding via Kickstarter in order to finance it.

Writers from all over the world will contribute to the book, which will act as a companion to the footage of peripatetics in action upon the streets of Athens. It will include various images and texts from writers and artists such as Svetlana Boym, Heather Felty, Maria Koundoura and Pablo Medina, and actively engage with the themes of nomadism, transition, appearance, disappearance, crossroads, geography, history, politics, unsettlement, archaeology, exile, estrangement and migration. This promises to be a very special project that will capture the hearts of art-lovers and Grecophiles everywhere. You can check the Kickstarter page out at https://www.kickstarter.com/projects/591179476/peripatetics-athens