Everybody has met someone who just blatantly refuses to shut the hell up about a certain subject. For no particular reason other than a love of indie music and trying to hone my writing skills I dug up info about a group out of Virginia called Wedlock. As a student I haven’t had the time to put out regular posts, and until summer I still won’t. So the best thing for me to do about these articles is to just wrap them the hell up. Over holiday break I saw an online interview w/ Paul Allgood. The lady from Wedlock’s Message board said it was okay to re – post. So I’m just doing that w/ thanks to Hell Hound for printing it in the first place. If anybody reading thinks a re-post is lazy, I really can’t do anything for you. That’s a whatever thing. I just refrain from making the internet ugly as best I can. Whether I succeed or fail at that is up to the reader.

Wedlock – With me, it was just a matter of finding the one word that flew in the face of Bush’s really bad idea for a Constitutional amendment. My way of saying any two human beings should be able to demonstrate what “Wedlock” is. I think we (w/ Dave from Praxis designs) really nailed down the whole concept.The logo exemplifies the meaning pretty well. The band name could have been “This Is Wedlock” and it might have been better; but I’m a big fan of one word titles.

HHM – When asked, how to best explain to other potential fans the overall message of Wedlock?

Wedlock – To my ears it’s electro, indie synth pop, with some left-leaning ideas mixed in. I have heard some people put us into an R&B/Soul/Funk category too, but only by a little bit. I honestly think there’s an ulterior motive when certain people do that, though.

HHM – Since 2006, you have been ridiculously busy cranking out recordings. How do you find that kind of time to record?

Wedlock – Being involved in something creative is what I love doing most of all. It doesn’t matter in what way,really, but my proclivity just leans toward words in general. If it’s not a song, it’s a novel or a script.

HHM – Do you find it difficult to get inspired to write different and unique material?

Wedlock – Sometimes I will get a mild case of writer’s block, but only in the one area where I am trying too hard. Somebody told me a long time ago as long as you’re alive there’s always something to write about, and that’s proving to be true.

HHM – In the formation of a track, what’s the process like for you? Where does it get its beginning?

Wedlock – Something as simple as a sound triggers it. An entire synth line or whatever doesn’t even have to be worked out to mout to make something out of it.

HHM – Once you have an idea, does it tend to change a lot from the original inception?

HHM – I do have to ask, because I’ve never heard it before…”bisexually themed”. Would you care to elaborate on that a bit?

Wedlock – That phrase came in part from another music critic when they reviewed one of our tracks “Cuts Both Ways.” I got inspired to write that song from being in sexually mixed clubs overseas.

HHM – There have been several members changes over the years, do you feel like that has helped the project or held it back?

Wedlock – Your continuity gets interrupted when people leave for whatever reason, but if you’re the one constant, the only person holding things back is you, and unless you just don’t want to continue, what else is really stopping you? I look at former band mates as something I’ve experienced to be at this point now.They are doing whatever they are doing, and so am I. Outside of our contract, there’s nothing forcing Wade or Kay to stay, and I’ve zero interest in trying to make music with somebody who doesn’t want to make music with me.

Wedlock – There’s another Celadon Candy coming out w/ some remixes and extra tracks.I’m working w/ Jorge Rangel on that.

HHM – Can you explain why you are also known as 105 Deckowls as well?

Wedlock – There’s another artist based in The Netherlands that used to go under “Wedlock” as one of his numerous aliases. Wedlock is trademarked here in North America, but out of respect and to avoid confusion, we just go by 105 Deckowls outside of that.It’s basically an anagram of the name, and Kay put that 105 there because once she saw a bunch of owls congregated together. I’ve never seen more than one at a time.

Wedlock – Well, I took a small break from Wedlock, and formed Celadon Candy. That first incarnation lasted for 2 Eps, and really before it was finished I was back recording Wedlock material again.

HHM – What are the future plans for Wedlock?

Wedlock – Another studio release, and playing out more frequently. 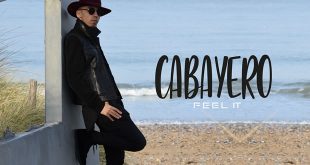 Cabayero is to Shoot his Upcoming Music Video in Los Angeles