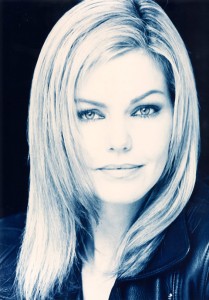 UCLA football’s most famous cheerleader, Former Miss USA and runner up to Miss Universe, Julie Hayek, will be appearing along with her former squad members at the Bruin’s homecoming game against the Colorado Buffaloes at the Rose Bowl in Pasadena, CA on Nov 2.

Julie  graduated from UCLA with a degree in Biology and it was while she was at UCLA cheerleading she was discovered and got her big break. As a result of her popularity, Julie  shot a poster for 20th Century FOX , was asked to do a screen test by Paramount Studios, was featured in a NBC Nightly News story, and prominently featured in a Sport’s Illustrated article Eight Beauties and a Beat. The news story included all eight members of her cheerleading squad and this marks the first year that all eight beauties are coming back to a homecoming game.

After her exposure at UCLA and after becoming Miss USA, Julie finished her Biology degree and then became a professionally trained actress. She has guest starred and co-starred in dozens of television shows as well as many feature films.