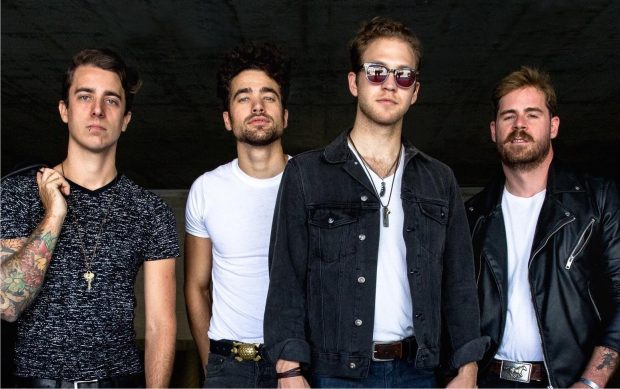 Los Angeles-based band, Eleven Dollar Bills have issued the first music video from their upcoming September EP release, “All Our People.” The video for “Waves” was released via VEVO and Youtube on June 27th, 2017.

July 11, 2017 – LOS ANGELES, CA – “Completely impressed with these guys…not a single doubt in my mind that the stunningly accessible sound of Eleven Dollar Bills could go on to be a seriously huge hit with the people out there – this is just damn fine music…no argument could possibly be made otherwise.” – Sleeping Bag Studios

Exploding onto the national scene via Los Angeles, meet Eleven Dollar Bills. Led by Berklee College of Music alumnus, the street-smart, Chicago born Jordan Casty, the Bills are cashing in at radio, with “Waves,” the first single from their upcoming EP.

Now, Eleven Dollar Bills and Infinite Entertainment are happy to announce the release of the brand new music video for “Waves.” Directed by Gordon Cowie and filmed in Los Angeles, the video was released June 27th. The video has already received over 16,000 facebook views, while accumulating more than 1800 likes on the social network. The band is just coming off a packed-house performance at the Viper Room in Los Angeles.  Get carried away by “Waves” on VEVO at https://www.vevo.com/watch/QMAXQ1503637 and on Youtube at https://www.youtube.com/watch?v=-qbhPYTRJQo.

Produced in Los Angeles, by multi-platinum songwriter/guitarist Jim Huff, “Waves” was co-written with BMI Award-winning Danish songwriter, Rune Westberg. Says Casty: “Waves’ is a summer jam about having fun at all costs and rolling with whatever life throws at you.”  So, roll with the tide, hang on tight, and ride the “Waves” with Eleven Dollar Bills…impacting radio and video outlets now!

“Waves” is taken from the forthcoming release, All Our People, scheduled for September 2017 release.