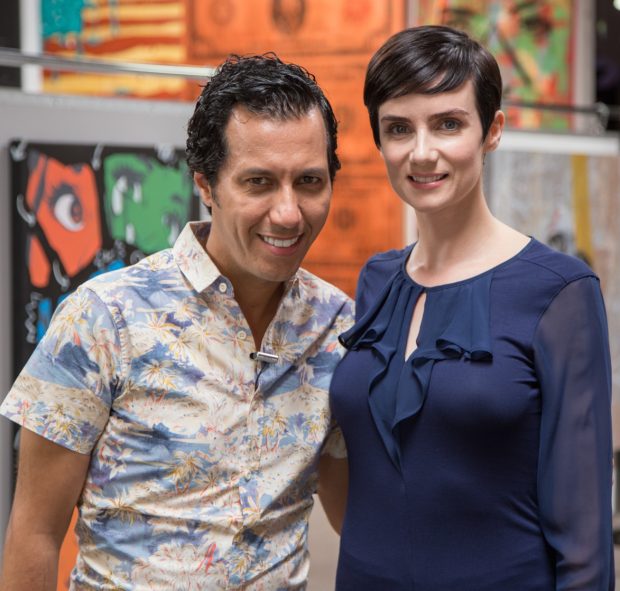 Simobb, a Moroccan TV reporter renowned for revolutionizing the Arab gossip media both in Morocco and the Arab world has turned the media world on its head once again as he interviewed popular British actress Victoria Summer exclusively on Sept. 19, 2016. Besides being famous for the iconic Julie Andrew in Walt Disney Pictures Saving Mr. Banks starring Tom Hanks as Walt Disney and Emma Thompson as author P.L. Travers, Summer played the lead role of British nurse Eleanor Morgan in the Damien Lay film Game of Aces.

In addition, she won a supporting role in Paramount Pictures’ Transformers: Age of Extinction, directed by Michael Bay.

A self-proclaimed adventurer and workaholic, Summer was passionate and dedicated to pursuing her dream of being an actress leaving no stone unturned as she ensured that every dime made was put into perfecting her craft, paying for her singing and dancing lessons. With the little funds on her, she found a nanny gig and started personal training on the side to make ends meet, and for several years worked in the musical theater world in London, before deciding to pursue a film and television career in Los Angeles.

Born in Reading, Berkshire and raised in the small town of Wokingham, Berkshire, Summer started her career with a scholarship to the Arts Educational School in Chiswick, West London where she obtained an honors degree in Dance and Musical Theatre, and she appeared in the Golden Jubilee of Queen Elizabeth II in 2002. Summer landed her first official job in the arts at the prestigious Almeida Theatre in London in her last year of school, as the understudy for the lead role in their first ever musical, ‘Brighton Rock,’ which was directed by Michael Attenborough.

Besides the first and only exclusive Moroccan TV reporter from Africa and the Middle East to interview RedOne exclusively in Los Angeles, and to cover EGOTs, Simobb is using his over eighteen years of vast experience in the media industry to influence the media world in a fascinating way. Among the several media houses Simobb has worked with are 2M; the second Moroccan TV channel, Nessma TV and Al Arabiya News English and B-Beirut (LBC SAT) where he covers glamorous international events currently.

During the interview, Simobb asked Victoria Summer how she wins over her audience with her charisma. Her response: “Charisma is all about being yourself; being grounded in yourself; knowing who you are, and it is your energy that people feed off of, and that is what they feel either when you are on camera, in the room, or when they need you in person.”

Summer’s great sense of production, conceptualization, and incredible skills at playing critical roles has put her in an optimal position for continued success. She played Kristina’ in the indie musical “How Sweet It Is” opposite Erika Christensen, and later played Polina in the sci-fi film, ‘Ratpocalypse’ (2015) opposite Casper Van Dien.

Summer concluded by sharing her recipe for her remarkable achievement, “The secret is persistence and staying focused; I just keep going and I do not stop. You have got to take off any poky barrier that comes your way and staying on that one path knowing where you are going and keep it going.”

For more information about the interview, visit
http://goo.gl/aRjZ6Y