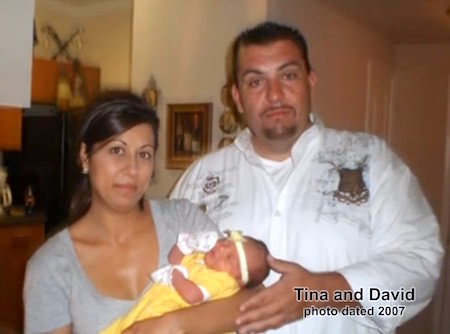 This is not a case of a woman’s mistaken intentions. This is a calculated con, from start to finish by a family of Rom gypsy scam artists in Arizona and California. It’s about befriending their victims and draining their bank accounts – nothing less.

Tina Costello Marks is a 39 year old woman who, along with her husband, David – and their 21 year old son, Jacob, target elderly men they deem vulnerable to their financial scam. Posing Tina as the single woman ‘finally able to trust again’, she befriends the man, inventing stories of needing investors for a non-existent business, help getting back on her feet, medical problems, transportation needs, furniture, etc.

Together, they bilk the savings of the man over the next few months, until he’s financially devastated. The criminal element within the Rom gypsies are well-known to law enforcement across the country for theft, fraud and swindles perpetrated against the elderly and vulnerable.

They selected Tina’s last elderly victim from a Sam’s Club parking lot in the Phoenix area. Tina, along with her son’s wife, Sarah Costello, approached the man claiming car troubles. Over coffee and lies about her identity, she told the man she was coming out of a bad relationship and grieving a dead brother ~ and so begins the confidence scam she and her extended family have pulled off so many times before, up and down the west coast. Finally, as fate would have it, she’s met someone she can really talk to, open up to, and enjoy life with again. That unlucky person was my Dad, an elderly farmer from the midwest who had lost my Mother to cancer 9 years prior. The chance meeting at Sam’s Club began a downward spiral in his life that would end with her stealing everything this hard-working man had worked his whole life for.

Identifies herself with a false name, seeking investment monies for a non-existent business

Tina Costello entered his life full-force with stories of the new business she was opening, and promises of the future. My Dad, having been widowed for several years, enjoyed Tina’s company and enjoyed spending time with her. She was fun and full of life – it was a new start to the last chapter in his life, he thought. He met her family (all players in the con) and they welcomed him. Her brother (husband) David, her nephew (son) Jacob and his wife, Sarah, and Tina’s daughter, Anna, were all part of the family’s plan to empty his savings.

Within days of meeting, Tina began taking advantage of my Father, driving him to a dealership and telling him of a great deal on a rare car, a 2013 $66,000 Roush Mustang, which was supposedly to gain value over the next five years.

My Dad did know that he was buying a car that day, but was told it would be his. They had him wire $66,000 from his bank account and went to San Tan Ford in Gilbert, Arizona – When the paperwork was being signed, Tina’s 21 year old son, Jacob, quickly ushered my Dad into another area with the distraction of a question that needed answering right away.

Before leaving this area, salesman Matthew Romano of San Tan Ford asked WHOSE name was going on the title – and my Father raised his hand and told them it was his name that was to go on the title.

When Jacob and my Dad returned to the area, conveniently, the paperwork had already been completed. When the title was mailed to my Dad – Tina (Nina Costello) was now on the title with my Dad. I’ll be careful not to heap accusations onto a company based on one employee, but I won’t hesitate to say this: That salesman knew that the elderly man giving him the money is the one who stated he was to be put on title. It shouldn’t matter what any other person ‘said’ after the owner left the room, the salesman should not have changed/added/altered what name was to go on that title. Agree?

The Car Tina Scammed From My Father

2013 Roush Mustang
The new car that Tina, Jacob and David drove my Father to the dealership to purchase, then removed his name from the title.

When my Dad received the documents in the mail and saw how his new car was titled, he asked Tina about this and she claimed it was a mistake, grabbing the title from his shirt pocket, saying she would get it changed and taking it with her. During the period of time that followed, they preyed on his age and inability to see that this was a con game, taking advantage of my Dad and bilking thousands in cash, opened lines of credit, furniture, vehicles and for the phony business Tina claimed to be opening. He was an ‘investor’ in this non-existent business (this ‘opening a new business’ line is quite common in these types of gypsy scams, I’ve learned). The numerous checks were written to the name of Nina Costello, and she misled him with each check with invented stories of what each was paying for.. ‘this one is paying for equipment at the job site’, and such. No job site, no business. All manufactured lies.

She called my Dad in a panic one day saying she went to go register his Mustang for him, but claims he’s in big trouble with the Department of Motor Vehicles for lack of insurance and that they’re demanding $1000 or they’ll come to the garage and take his car —> the only way out of this mess, she says, is for her right then and there standing at the DMV – to title the Mustang temporarily in HER name alone, removing him from title.

He went to her house numerous times asking for his new car, that he paid cash for, and she put him off every time, never letting him have it.

* Added for clarification: I’m referring to the place she was at as the DMV, when in actuality, it was a third party business authorized by the DMV. I’m unfamiliar with how that works, but it’s my understanding that it’s common to use these places in Arizona.

Since she was able to get the car transferred fully into her name, she knew she scored. Tina, David, Jacob and Sarah.. their life of thievery is as natural to them as eating and sleeping. It’s the typical gypsy sweetheart swindle, going from one senior citizen to the next, staying until they’ve depleted their entire savings, or until a family member catches wind of what’s going on and alerts law enforcement. By this time though, such gypsy scammers are long gone, and so is any hope of recouping the money taken from the elderly victim.

Tina Costello ultimately stole $150,000 from my Dad (in addition to numerous store cards and another 40k vehicle which he remains responsible for). They do not, nor have they ever, held any real jobs – So, as they move onto their next aging victim to take advantage of and financially exploit, my hope is that someone reads this; a family member, a caring neighbor, a friend with suspicions about their elderly friend’s newest ‘friend’.. maybe they can stumble upon this page, and prevent Tina, David, Jacob and Sarah from destroying someone else’s final years.