editor May 30, 2014 sponsors Comments Off on Madison McKinley Garton 1,466 Views 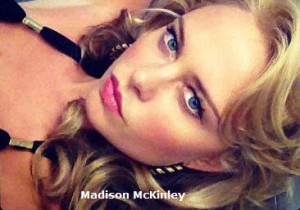 Born Madison Garton was raised in Vail, Colorado, where she attended the Vail Mountain School. Her modeling career began after high school when she signed a contract with Next Model Management. When she became a model, she chose her middle name, McKinley, as her stage last name. Madison McKinley traveled to many different countries including Australia, Japan, Germany, Greece, and South Africa for her modeling assignments. After three years of international traveling, she settled in New York. Eventually, McKinley found that modeling was not enough, so she began her Hollywood acting career in 2007 and continued to model throughout her acting career.

Madison McKinley is an actress and a model who gained national attention when she appeared on the fifteenth season of “The Bachelor” show as one of the 30 women competing for the attention of Brad Womack. From the moment Madison stepped out of the limo dressed in a stunning outfit and wearing fangs she grabbed the attention of Womack and the American public as well. She definitely made waves and raised eyebrows as a contestant on ABC’s “The Bachelor.” Not that Ms. McKinley’s career needed much of a boost as she was already a working model and actress with several parts to her name in shows and movies such as, “30 Rock,” “Rescue Me,” “Kings,” “White Collar,” as well as having been featured in the Star Magazine in 2010.

McKinley’s Hollywood acting career began all the way back in 2007, when she landed a single-episode role, as the “Dutch Cousin,” on NBC’s extremely popular show, “30 Rock.” Her entry into acting was with some of the industry’s heavy-hitters, such as Alec Baldwin, Tina Fey and Tracy Morgan. That episode, “Greenzo,” also boasted cameos by Al Gore, Merideth Vieira and David Schwimmer. Not many actors can say that their first acting job was with a former Vice President of the United States of America!

In 2009, she appeared on “Kings,” “Michael and Michael Have Issues,” and the popular “Rescue Me.” McKinley had a role as a bartender on NBC’s drama, “Kings,” which was a loose and modern interpretation of the story of King David. Although a small role as a bartender, she was fortunate enough to work with the Golden Globe winning actor, Ian McShane, of HBO’s Deadwood. Within two years of starting her acting career, Madison had worked with award winners, journalists and politicians. That same year, McKinley landed a 2-episode role, as Mrs. Nelson, on FX’s critically acclaimed and Golden Globe nominated “Rescue Me.”

In 2010, McKinley continued her success and appeared in USA Network’s “White Collar.” This cable gem starred the up-and-coming Matt Bomer, as well as the perennial favorite, Tiffani Thiessen. Madison continued to learn from some of the best in the business. McKinley’s had always worked on acclaimed shows, and with some of the biggest names in the industry.

In 2011, when she made two appearances on TBS’s Image Award-winning “Are We There Yet?” this leads us to her television appearance, on DIRECTV’s acclaimed “Damages,” where she was honored to grace the same stage as Glenn Close, Rose Byrne, and Dylan Baker. In this episode, for the first time in her career, McKinley appeared topless, which sent waves through Hollywood and the blogosphere. However, first of all, she was not in a sex scene, nor did she show full frontal nudity. The scene itself wasn’t gratuitous. She was sleeping in bed, with the ruffled covers not fully covering her. It was harmless and real. Of course, there was a naked man and woman in the bed, but that was germane to the plot. McKinley also made a move from television to movie, and, in stark contrast to her topless appearance on “Damages,” she played a principal role in the “Smurfs 3D Movie.” Here, she added to her impressive list of co-stars and worked with Hank Azaria, Neal Patrick Harris, Jayma Mays, Sofia Vergara, and even Tim Gunn.

In 2012, the alluring actress and model was spotted on a yacht in a black swimsuit standing next to Leonardo DiCaprio on the filming of  ”The Wolf of Wall Street” at the Battery Park Marina in Downtown Manhattan on September 24, 2012. This film was released in December 2013. “The Wolf of Wall Street” film is based on a memoir by Jordan Belfont, and it marked the fifth collaboration between DiCaprio and legendary director Martin Scorsese. In the film, McKinley plays Heidi and DiCaprio, as the leading actor, plays a New York stockbroker who “refuses to cooperate in a large securities fraud case involving corruption on Wall Street, the corporate banking world and mob infiltration.”

From 2013 to present, McKinley has the honor to share the screen with Hollywood heavy-hitters on ”Palm Swings,” “Untitled HBO/Rock ‘N’ Roll Project,” “Kensho at the Bedfellow,” “Power,” “The Other Woman,” “Wolf of Wall Street,” “All My Children,” “Law and Order: Special Victims Unit,” “The Good Wife,” “NYC 22,” and “Americana.” Madison McKinley’s acting career has been relatively short, but she has been honored with roles on critically acclaimed and award-winning shows. Perhaps this career move will bring her further notoriety. In 2014, Madison McKinley continues to learn from some of the best in the business with roles on “Untitled HBO/Rock ‘N’ Roll Project” (TV Movie – 2014), and “Power” (TV Series – 2014). Her latest films are “The Other Woman,” Kensho at the Bedfellow,” and “Palm Swings.” The “Kensho at the Bedfellow” film was filming in New York City and will be released in 2015. Martin Scorsese’s “Untitle HBO/Rock ‘N’ Roll Project” has begun production this summer 2014. McKinley will be a lead co-star in Sean’s Hoessli’s drama film in 2014.